I used to be a big fan of “the right protocol for the right job” - meaning that HTTP was just right for Hypertext documents, and FTP is what you need for transferring files. That’s what they are designed for, right.

Well, that was before I was behind a draconian firewall that only allows out HTTP and HTTPS.

So now, I can’t download a driver for a C2100 Fuji Xerox DocuPrint printer, which I need to use for work, because they only offer the file over FTP. And because it is a system-wide block, I can’t even get my local sysadmin to allow the transfer.

I bought a copy of this fantastic textbook on Friday.

I won’t write a review, suffice to say it is the book to use to learn how to program on the Mac.

It’s an interesting situation, this whole change of career business. I’ve had lots of opportunity to say to myself, or anyone who will listen, “this is the last time I will do this.”

Most recently, this is the last time I will write reports. Something I have always despised, and I won’t miss it one iota.

I’ve also had the last Year Level Meeting, last Student Free Day (those are pretty good, but), and last time I have to submit student work for moderation.

In three days, I’ll have my last teaching lesson. That’s a big one!

And then, at the end of next week, my last day.

I have used a number of Computer Aided Design and CAD packages. Today, I used Google Sketchup for the first time.

It has some differences, and could be an excellent program, but it just does lots of things (IMHO) wrong.

For instance, it allows you to place a dimension on a line, and then change it. But it doesn’t actually change the length of the line. If it did this one thing, giving it parametrically controllable dimensions, then it would do most of what I want. Instead, I need to create a line or box, (change tools to) place a dimension, (change tools again to) resize it until it is close enough to the size I want.

To make it a bit better to use coming from Inventor, I set up ‘D’ as a shortcut key for Dimension, and F5/6 for Previous View/Iso View. Much better for my muscle memory!

It uses a different paradigm than Inventor, rather than using a series of parts, it really is just a sketch. Having said that, here is an accurate representation of my house. Accurate in some ways, not all. 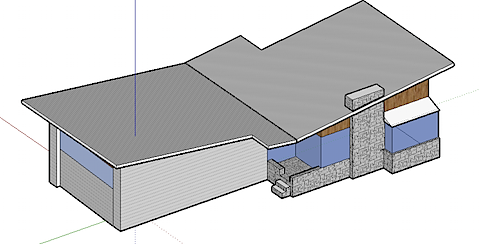 And the best thing over Inventor? It runs native on OS X.