I hate when that happens. The problem I mentioned (OSX Application Startup Issues) is gone. Magically, every application launches fast. And I didn’t actually do anything to fix it.

I’ve come across several Smarty Tags that call WordPress functions that have listed arguments that don’t work. I didn’t bother too much about it - usually I can live with it. Then, I realised how I solved one instance of this happening: the Recent Comments plugin.

I downloaded the source to this, and looked at it. Besides there being some spelling mistakes, it had argument names which differed from the documented ones. No wonder it was failing when I tried to change the number of comments, and the comment length! So, looking at the code helped me solve the problem. Maybe it will with the other issues I have come across: most notably {previous_post_link} and {next_post_link}, and {edit_post_link}.

I’ll start with the {edit_post_link}. The codex says the argument I want to change is called text, but the source reveals it to be link. Changing this enabled me to change the text that is presented to whatever I want. The same goes for {edit_comment_link}.

Depending upon if you want an image clickable, you can either insert the code into the format or link argument. Just for fun, I included my favicon in the non-link section of the link text (ie, the format argument). I’ll leave it there for a while, just to prove it can be done…in the meantime, I’m going to fix the Codex.

I noticed that for some reason some of the bits and pieces I had installed on my NSLU2 were not being restarted at boot time: notably dnsmasq, which is a Domain Name Server and DHCP server. I started using this just for fun, but found that after an NSLU2 reboot I wasn’t able to reconnect to the NSLU2. It turned out that for some reason the imac was being given a bizarre IP address, which wasn’t even on the same subnet as the NSLU2. In fact, IIRC, it wasn’t even a legal private domain IP address! Now, I have several things installed on the NSLU2: cron, inetd, portmap, appweb and dnsmasq. I had also installed mt-daapd at some stage. It turned out that mt-daapd was failing to load, and this was causing the script to bail out, without running the remainder of the items. I think. Moral of the story: ensure that you are only loading stuff you need, and that everything is running smoothly.

I’ve spent the last week in Darwin, NT, coaching a team in the School Sport Australia National Touch Championships. This is my fourth year coaching the SASSSA 15s girls team, and I just thought I might share some thoughts on my experiences this time around. Coaching a junior girls team has plenty of it’s own challenges, but really this age group is my favourite. I couldn’t handle coaching a little bit younger: I see how much work the 12s coaches have to do just to get the players to take the field, and I certainly wouldn’t want to coach 15s boys. It’s nice that it **is **possible to get your players to comply with instructions. I had the experience this year of coaching some Mens teams: State League and then Mitchell Cup, and whilst I enjoyed it, I’m not about to stop coaching the 15s just yet. The tour began with a nice early plane flight to Darwin - we left Adelaide at around 7:30am on Sunday, after an early night before following the team (and parents) dinner. Obviously the girls were excited, and with only 3 second year players, I knew this was going to be a challenging tour - on the field at least. The other big change of this year was that the girls weren’t billeted. Instead, the 14 of them, plus the 14 boys, were all staying together, with 5 officials. Two coaches, two team managers and a tour manager. It meant we had to look after them each night every night, and couldn’t socialise with the officials from interstate to the extent we had in the past. Stepping off the plane into Darwin airport you already knew it was hot there. I’d tried to psych myself and the girls up for this, but unless you have been there you just cannot understand the climate. It doesn’t get below 25 C overnight, and is always 34 C during the day at this time of year. We had a light training session on the day of arrival, quite late in the afternoon, on the foreshore near the esplanade. Not quite enough room to train, but enough to get some idea of what the climate was going to do to us during a game. Rehydrate. The one word I would say more than any other during the week. Day one of competition brought us face to face with Queensland - who as it turned out would eventually go on to win the tournament. Now, for those a little unfamilar with Touch in Australia, it’s always Queensland v. New South Wales in the finals. No-one else really gets close, and it’s likely to stay that way for the forseeable future. When you compare a state like SA where no-one plays Touch that much, to a state where they all play Touch, there’s just no competition. So the result for the first game was a given. 18-0 in the end. Close to my worst result against them, but at least we kept them to 6 in the second half. The second game for the day was against Western Australia. In recent years WA have been quite strong, but their team was not quite up there this year. They still beat us 3-1, but we were competitive. Possibly my best result against the West. Day two had two very winnable games: Tasmania and NT, the home state. Both teams we beat last year, and comfortably too. Tassie up first, and we really looked the part. Unfortunately, they managed to outscore us, and we lost 3-2. A big break before the night game against NT, but it didn’t help us. The best NT team I’ve seen rolled over the top of us 10-0. One player short due to disciplinary reasons was not the deciding factor! The wednesday is a rest day, and this year we went to the Adelaide River, and saw the famous jumping crocodiles. Apparently our red shirts were distracting them, but they were still rather impressive. Especially stumpy. 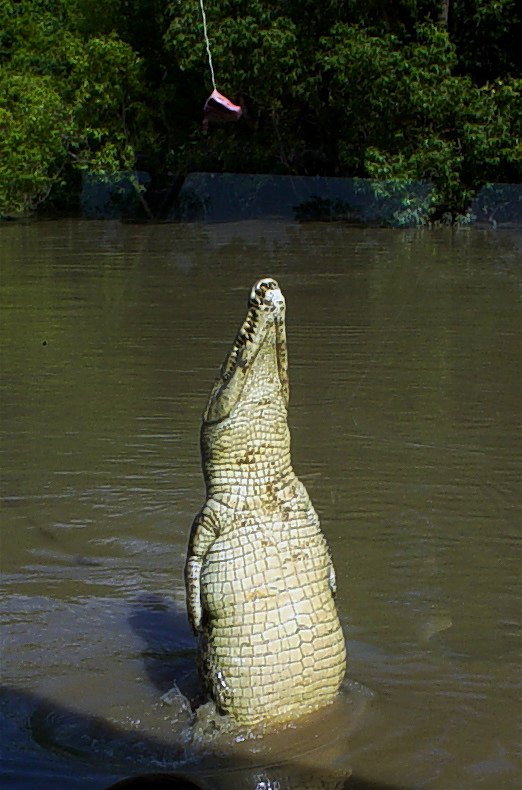 That night we had the officials dinner, and I had to give a speech. Ashley, our Tour Manager was receiving an award for 10 years (actually 12, but they forgot to award him the previous two years!) service. I loved how he started his speech:

I had prepared a speech for the previous two years, but didn’t bring one this year because I thought I wasn’t going to get the award this year either!

The most amusing thing was how Marie, who also received an award, started her speech (which, incidentally, preceded Ashley’s):

I wasn’t sure if I was going to receive an award this year, as I thought you had to do 12 years of service to get the 10 year award.

Do you notice the common thread? Day three of games, and the hardest day. A three game day, with Victoria, ACT and then New South Wales. Two games we should have won, and one I wasn’t even treating as a game. But again we struggled, only managing to hold a draw with Victoria, 2-2. ACT we looked all over them, but they managed to sneak a couple of touchdowns through our line, even though we held them up our end for nearly 95% of the game. In the first half, they only got down past their 10m line three times! And two of these were their run-through touchdowns! We managed only one, a great run from Mel. NSW up next, and we actually had to take this more seriously than I had planned, as it meant the difference between 7th and 8th, and games versus Tas or ACT in the finals. 7-0 in the first half, but we ran out of legs, and they finally ran over us 17-0. Still, we kept them to no scores for most of the second half, except the last two minutes when they ran in 10 quick ones. Or something like that! Finals on the friday, with a late start, and we played ACT first. Whether they were holding back int he round game, we really didn’t look competitive. 6-1, perhaps the largest difference I’ve had in an ACT game. Last year they managed to only beat us int he round game after the siren, but I’m yet to beat Toppies girls. Maybe next year. Last game of the tournament, and still yet to bag a win. It was the two winless teams, us and Vic, in the big 7th v 8th playoff. We looked to be all over them early in the game, but couldn’t manage to get the ball down over the line. Then, horror of horror, they got a couple of quick touchdowns. We continued to keep the ball up our end, and finally were rewarded with two ourselves. 2-2 at half time, and time to get pumped up. The game thus far had been rather hard, with Victoria being penalised 6 or so times for hard touches, and us none. Yet still the referees warned us of being sent if we infringed! Surely after 6 hard touches in the first half they might have sent one of their players, but alas. No juice. I warned the girls to be careful, and to their credit they were. Late in the second half, after a hard-fought game, Des, our captain, received a penalty around our defensive 10m line. A quick tap, and she was through their line, running hard for the scoreline. She made it, and we led for the first time that game - possibly the first time in the tournament. We managed to hold them out for the rest of the game: no mean feat considering we were down to 12 players, missing our best performing winger; and one of the key playmakers and vice captain. But, the game was ours. The sweet taste of beating Victoria. I was concerned the kids would play up a bit on the last night: we no longer had the stick of missing a game to hold over them, but they were pretty good. I stayed up pretty late, but noone even looked like sneaking out of their rooms. The flight back was routine - Fever Pitch was apparently remade recently starring Drew Barrymore and about the Red Sox, not Arsenal, but it was still a good film. Lots of the girls were pretty emotional at the airport - I even received a group hug from all of them as I prepared to leave. I wonder if they were just a more emotional bunch than I have taken away - perhaps that’s why they didn’t perform as well until I really pumped them up before and during the last game. Or perhaps having them stay together and with us helped us all create stronger relationships. Maybe looking after them wasn’t so bad after all.

I have noticed that my post hit count dropped off dramatically in the past week, when not posting any new entries. Hint for new players: post often if you want people to keep reading…