We watched the movie Enid the other week. I read lots of Enid Blyton books as a child, and really enjoyed them. This movie really pushed home how, whilst she had an amazing impact on, and connection with, millions of children, she really didn’t have a very good connection with her own. My tip is, if you don’t know much about her life, but enjoyed her work, don’t watch the movie. Whilst it was excellent, it really sours the memory of her books.

Similarly, I read Walter Isaacson’s biography Steve Jobs recently. Unlike what seems like everyone else, I actually quite enjoyed it. Sure, there may have been some factual errors, and maybe it could have been a much better book, but I felt it did give me a lot of insight into the man that I never had up until that point. I would like to have known more about the NeXT years, but it still contained a lot of what was to me new information.

Interestingly, my mind drew a lot of parallels between these two people, lots of them coming after the fact as I finally got around to listening to all of the 5by5 podcasts discussing the book. The main similarity for me was that these two people had huge impacts on lots of people, but failed to connect effectively with their own children.

Which brings me to my mother. It was her 60th birthday on the weekend, and I gave a short, crappy speech. What I really wanted to say really only crystalised in my mind after a couple of other people had spoken, and I had some time to think about it.

My mum worked for many years running the child day care centre in Naracoorte, and whilst she didn’t touch quite as many childrens’ lives as Jobs and Blyton, the number of children she had a significant impact on was by no means small.

The difference was, she still managed to have a great connection with her children.

It came up in the #django IRC channel the other day about how to extend a django admin template to show other information, possibly related to an object, but not necessarily editable.

I use this in production: we have a Company object, which has Location objects associated with it. The django validation is stricter than the data may have been created for these objects, so from time to time a field is missing, and the django admin will not allow saving it.

So, I wanted to be able to display some information about each related object, with links to various bits and pieces. Having the inline Location data is great, except for when it is missing something, that we may not have received from the customer yet.

The trick is that you’ll need to override the admin template for that model.

In this case, our class is in app_name.ModelName, so we need to put the following structure into our template directory:

Within that file, I have the content (spaces between % and {,} are there because I can’t remember how to escape them in Liquid Templates…):

In my case, I have the following html structure, and it looks nice:

The other trick is that the admin change view gives us an object, called original, which we can use to do lookups on related objects and the like.

The django admin is awesomesauce, and does most of what I need an administration interface to do. There are lots of places where you do need to extend it, and this is just one way of doing that.

Just deployed the Bing Boy website: www.bingboy.com.au. This is actually something that I’ve been working on for a long time.

Jaq did the design, and I put together the site using jekyll. Actually, Jaq did the design for everything, right from the logo and all of the print materials, right up to the shop layout and fitout. I believe she even named some of the menu items!

So, pop along, have a look. If you live here in Adelaide, then make sure you check them out, they are super tasty. My favourite is Pretty n Peking. There are two stores so far, and more opening soon: Myer Centre and Southern Cross.

In case the site has changed, here is what it looked like when deployed: 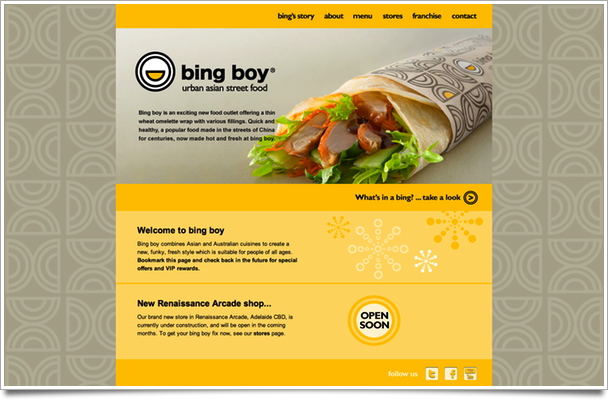 Django’s form validation is great. You can rely on it to parse data that you got from the user, and ensure that the rules you have implemented are all applied. Model validation is similar, and I tend to use that in preference, as I often make changes from outside of the request-response cycle. Indeed, I’ve started to rewrite my API framework around using forms for serialisation as well as parsing.

One aspect of validation that is a little hard to grok is changes to many-to-many fields. For instance, the part of the system I am working on right now has Tags that are applied to Units, but a change to business requirements is that these tags need to be grouped, and a unit may only have one tag from a given TagGroup.

Preventing units from being saved with an invalid combination of Tags is simple if you use the django.db.models.signals.m2m_changed signal.

Now, this on it’s own is nice enough. However, if you try to save invalid data from within the admin interface, then you will get an ugly trackback. If only there was a way to get this validation code to run during the validation phase of a form. i.e., when you are cleaning it…

So, we can create a form:

You can create a complementary form on the other end (or, if you already have one, then just hook this into the field validator). The bonus here is that the validation errors will be put on the field with errors, in this case units.

A recurring feature of #django is that someone asks about settings.py, and using a local_settings.py file. The standard advice is to have the following in your settings.py:

This is usually the last (or one of the last) things in the file. This can be used to override settings with sane values for the local environment.

However, this means that local_settings.py must be not in your source control system, or must not be deployed to other servers.

I like keeping everything in my source control system of choice (mercurial), and currently use an hg-based deployment. In my fabfile.py, instead of archiving up the current structure, I use hg to push the main repo, and any sub-repos, and update them to the version that is displayed locally.

This means I want to be able to control the content of production’s local_settings.py equivalent.

The other issue, and this was the one that came up today and gave me the idea of this post, is that someone wanted to add an app to settings.INSTALLED_APPS but only locally. I too have done this (still do, with django-devserver, amongst others).

I came up with the following solution. Instead of having a settings.py and local_settings.py, I have a settings module:

base.py contains what was normally in your main settings.py file. That is, settings that are common to all environments.

Then, in each of those files, where I need to override or alter a setting, including appending to a list or tuple, I can just modify away. Some things that I do in development.py, for instance:

This shows how you can set a value, alter a value of a dict given a specific key, and append to a tuple. I also have a nice little setup where I use a value set in the base.py file (PROJECT_ROOT) to determine where I want to log email messages to.

Finally, you need some way to say which of these files should be used. This is all done in __init__.py:

This method does require a little bit of maintainence: when you have a new server name, you need to add an entry to this file. If you are often creating testing servers (like I am) then you might want to use testing as the default server type.

Alternatively, you could use some sort of prefix to mean a particular server type.

Anyway, that’s how I do it. The only drawback is that it does mean that your SECRET_KEY, and any passwords you might have defined in settings.py are stored in your repository. We aren’t that fussed about that right now: our project is closed source, and only trusted people have access to the repository.