With COVID-19 starting to cause significant lockdowns, our music lessons have moved to online. Our piano and cello teachers are both using Zoom for this.

Piano was fine, but the Cello teacher noticed that when my eldest son was playing some notes (especially the lower ones), the audio was cutting out. When he mentioned it was fine at the start of the note, but dropped in the middle, and then came back at the end, it triggered something in my brain.

Turns out Zoom has automatic background noise cancellation. This was picking up the low sounds of the Cello and blocking them.

This is fairly easy to fix:

Then, set both types of background noise suppression to disabled: 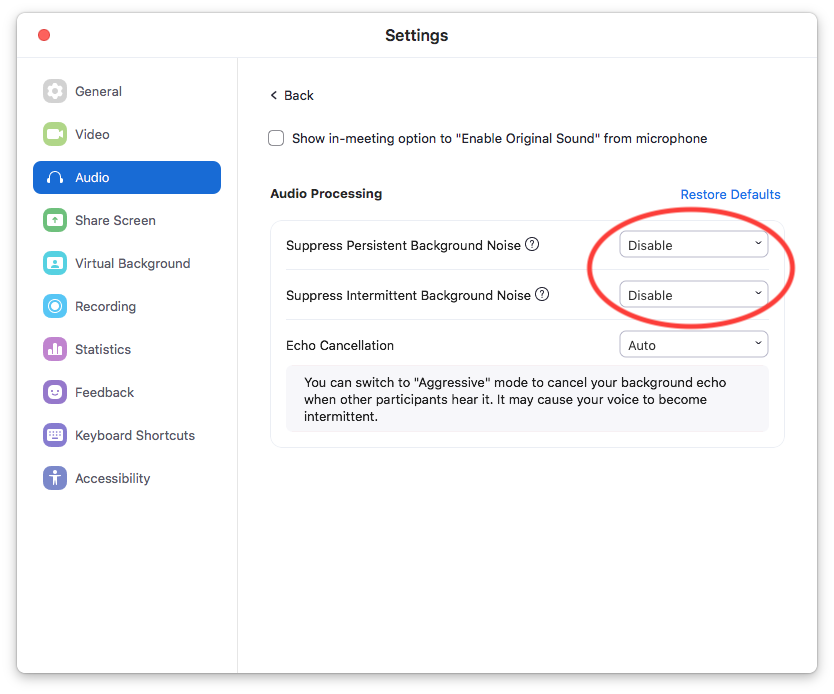 I’m not sure which one is more important: you’d think it was probably intermittent, but it was easy enough in our case just to leave them both set to disable.

It’s Friday. End of our first week of working and schooling from home.

We bought a new iPad for the boys, which arrived within 25 hours. They are now using it attached to the trampoline; the old iPad was not working with that, so that’s a bonus. We also bought a water filter, so it’s been a productive week.

Working from home has been fine. I’m sure I’m not as productive as I was in previous weeks, but I don’t know how much of that is COVID-19 in general playing on my mind.

Australia’s infection rate is still above what my 23% compounding increase model suggests. https://covid-19-au.github.io is currently showing 854 confirmed cases, whilst my simple predictions said 835 by today. Watch it go over 1000 tomorrow.

According to the Guardian, our rates are slightly better than most other countries, although only Japan is an outlier there. Since that’s a logarithmic scale, we are perhaps even better off than it seems. Not sure how much of that is just insufficient testing though. On the same page, you can see that our total number of deaths is low: however, there is nothing that shows deaths-per-infection.

SA still sits at 50, which is about 30% better than predicted. However, we are not doing nearly as much testing as NSW.

Recommendations are to stay at home all weekend. I suspect I will be taking the boys somewhere - perhaps we could go for a walk in BNP.

I really don’t know how this is going to play out.

It seems that the Australian government just doesn’t want to shut schools because they know when they do shut them, they won’t be re-opening them for many months. What they’d prefer to do is hold that off as long as possible, at the cost of people’s lives.

Currently, in Australia, the number of cases of COVID-19 appears to be growing at a rate exceeding 23% per day.

At that rate, we’ll have over 1000 cases by the weekend, and 10k within a fortnight or so. Within three weeks, there will no longer be any where near enough intensive care beds or ventilators to support the number of critically ill patients, and we’ll start to see Italy-like levels of mortality.

How will schools stay open when teachers are dying.

Our parents don’t seem to realise how dangerous this is.

My parents are apparently still planning on travelling from a rural town of 6000 people (they actually live on a farm, so that’s even better), where they are relatively safe, to Adelaide to attend a funeral. I understand that it’s one of their friends that died, but to be honest, there will be a lot more of those in the not too distant future.

And my partner’s mother was planning on going to the hairdresser tomorrow.

Personally, we have savings, and I have a stable job (for now). But considering the number of our customers who are service industry, quite a number of which I have little doubt will be out of business in short order.

There will be a new normal, we just don’t know what that is going to look like.

The Australian government is in denial.

It’s becoming clear that the global health crisis from COVID-19 is very likely to worsen quite quickly. From information I have come across from reliable medical sources (mostly from the ABC), it seems that our government is probably not doing enough to slow the growth of cases, and that the health risks to all age groups are significant, not just the elderly or vulnerable. Similarly, it feels like our health system has every likelihood of being overwhelmed by the increasing case load of critically ill people.

Because I have the “luxury” of being able to work from home (and still be gainfully employed), I am now doing so; additionally we are keeping our children home from school. Whilst there is probably very little practical risk from any two students attending one specific school, every person you come into contact with, and more so every person you remain in contact with for a significant period of time is an increased risk.

Other countries have been recommending that gatherings larger than 5 people are sufficient to continue the spread of the virus, and whilst it may seem that Australia (and Adelaide specifically) has less risk right now than some European and Asian countries, we have already seen Victoria declare a State of Emergency. Yet our government maintains that 500 people is still safe.

The number of confirmed cases in Australia has reached a higher proportion of the general population than that of the United States, which has many states and cities implementing strict shutdown policies.

Around 4000 doctors sent a petition to the government asking for strict lockdowns, fearing that our outcomes could be worse than that of Italy.

The government continues to maintain that this disease is just not that risky for young people.

This is just a flat-out lie.

The only reason we have not had deaths in Australia of young people is just a matter of numbers. Currently, anyone who has had severe respiratory issues has been able to receive artificial respiration. This will change, as there are only so many resipirators in Australian hospitals. As more people are infected, more will get serious complications, and some of them will miss out. Either on a respirator altogether, or later in the epidemic, perhaps even a bed.

Children appear not to be having severe complications, or even especially strong symptoms, but there is evidence that asymptomatic people shed a higher amount of the virus, and children continue to have the virus in stool samples well after they are deemed to be “clear” according to a throat swab.

So, my kids, partner and I stayed home today. I think it’s still fun for them - we have tried to help them understand the scale of this problem (“We could be here, just the four of us together for at least two weeks, maybe even longer”), but the novelty (oops) of being home-schooled has yet to wear off.

I’m thankful I have the means and opportunity to work from home, and have my immediate family here with me. We aren’t going to see the boys’ grandparents for some weeks, and I’m sure we’ll all go batshit insane from being around one another non-stop for an indefinite period of time.