This March is the 100 year anniversary of Einstein’s Special Theory of Relativity.

I didn’t really get into the new series(es?) or Dr Who. I used to watch it as a kid, since I only had two TV channels, one of which was the ABC, and this, along with The Goodies and Monkey! were staples of my afternoon/early evening viewing. Then, later on, it was time for The A Team (which, along with Monkey!, I wasn’t really allowed to watch), and the original Battlestar Galactica, Buck Rogers and the like.

So, I wasn’t really that interested in watching Dr Who. Except apparently there is nothing else on any of the other stations at the time it is on, which is a Saturday early evening. So, in the last month, I’ve been tuning in. It just shows you how I don’t have a social life, too.

And the episode aired last night was fantastic. Statues that are really Quantum Assassins, that turn to stone when any living creature looks at them, so they look like statues. But if you look away, then they can sneak up on you, and kill you.

Back in 1970, the French Government tested a heap of Nuclear weapons on atolls in the pacific. This photograph is allegedly one test on the island of Licorne.

This photograph looks so much like a painting it is amazing. 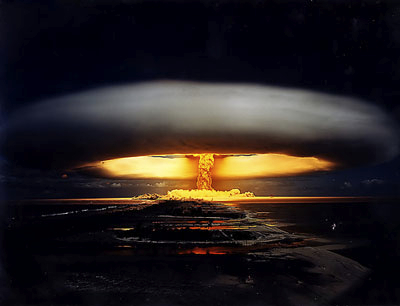 The VCSi Forums - How dangerous is it to shoot straight up

According to tests undertaken by Browning at the beginning of the century and recently by L .C. Haag, the bullet velocity required for skin penetration is between 45 and 60 metres per second which is within the velocity range of falling bullets. Of course, skin penetration is not required in order to cause serious or fatal injury and any responsible person will never fire bullets into the air in this manner.

A couple of months ago, I was having a discussion with some friends about shooting straight up in the air. I can’t remember the result, but here is a nice article detailing the physics and results.