The whole idea of Diplomacy is about kissing the right arses. Whether you suck poo out is another matter.

I typed schinckel.blogpsot.com into my browser, wanting to check out the links I had made, but got the address wrong. Have a look - it’s funny if you look at my post a little while ago. I thought some vengeful god was hacking me.

Just for fun (actually, to see if Google I plugged in “Life According To Matt” (notice the quotes). I was happy to say that this blog came top of the results list, but I was amused to see the remainder:

From then on in, everything is bible related. Without the quotes, I come in number 3. Like anyone cares.

Did you ever hear the saying “you can’t turn chicken shit into chicken salad?”

I was hunting for some artwork for some iTunes tracks tonight (very nearly this morning), and I came across this page for the album There is a Way to Fly, by Coda. 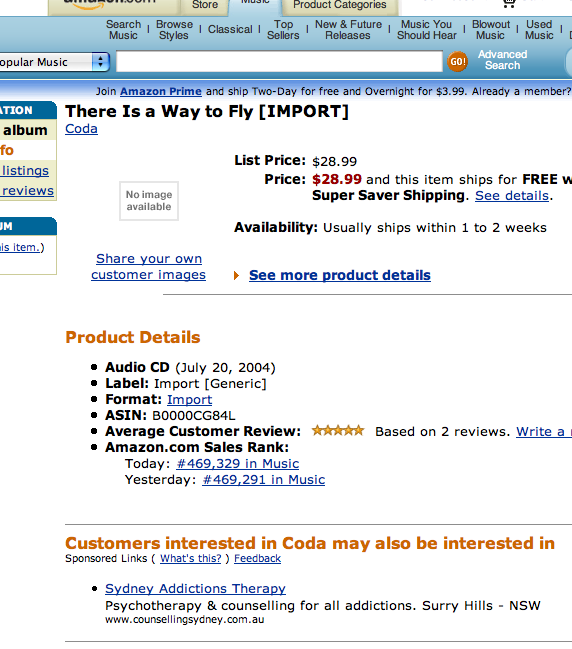 According to this, people who listen to Coda are likely to be on drugs! Or maybe I just misinterpreted it: maybe Coda is an addiction I need to kick.

For the uninitiated, Tripod are an Australian 3-piece band who compose and perform ‘comedy’ songs. Probably their biggest claim to fame is the Tripod Song In An Hour segment they used to do on Breakfast with Adam & Wil on Triple J. The hosts used to come up with a series of (unrelated) topics that the boys from Tripod then had to make a song about in one hour, and perform it at the end. The always managed to pull through and usually the songs were quite amusing. Jaq and I received some free tickets to see their live act Self Saucing Tripod, part of the Adelaide Cabaret _(Cabarette) _Festival., and went and saw them on their last performance, last Thursday night. Our seats were either excellent or woeful, we thought as we went into the Dunstan Playhouse: right up the front on Table 4. We managed to get there early, were first into the place, just to make sure we had the seats facing the stage, not with out backs to it. Lucky we did so, as the people in second place were the others on our table… Being right up the front was actually great! You could see the boys in great detail, and we didn’t get picked on at all. The only qualm I would say I had was that it wasn’t really possible to see more than one of the trio at a time - we were so close we needed to turn our heads (slightly) to see the others. Apparently Tripod have quite a following - lots of the girls audience were wearing t-shirts, and I’m sure they sold a lot more in the foyer afterwards.

Having only heard them on the radio (and only a few times, to be honest. I listen to Classic FM, not the Youth Network…), and seen one song on Video Hits - which they played incidentally - I sort-of knew what to expect, but I didn’t realise just how talented they were. Ignoring the fact they are comedians, they are fine musicians. Three part harmony, better ‘beat-box’ than Joel Turner and the Modern Day Poets, a talented guitar player (and another one who is alright…), and a trumpeter. Many of their songs start with lovely guitar playing, layered vocal harmonies, and kicker jokes. Which brings me to the biggest beef I had. I understand that many of the songs are designed to be interrupted, but it seemed to me that they only had two songs of any reasonable length. I wonder if writing biting social and political satire into songs is just so damn hard that they cannot do it for more than a couple of measures at a time. Do they run out of material, or is it a conscious decision to fit more songs into the show? Don’t get me wrong, I was not unhappy at all as I left the theatre, but it left me wondering: what would real songs from them sound like? They made a joke that the only reason they were still around today was:

Scod: Because of a rich aunt. Who used to pump money into the act, and asked for nothing in return. Yon: Except that I had to go around there every weekend and smear vegemite on her … Scod & Gatesy: Aaargh! Yon: …toast. Yon: And then I fucked her.

I wonder if that was true. Not necessarily about fucking the aunt, but if they would have made it as a real _band. Their two songs that went on for a longer time were both pure genius. One of them you may have heard: Make You Happy (The Xbox Song) is a sweet, balladic song about a guy and how much he loves his girl, and he’ll come to bed as soon as he finishes the next level. I think lots of people know how both characters in this song feel. The other one was, I thought, even better. The Hotdog Man is a happy (Frente-like?) song about aHotdog man, and how he loves his job, his customers and his family, but leads onto his darker side. I’ll not go into any more detail, like many comedy songs, listening to it the first time is the best. Which leads me onto another thing. Hearing many of these songs the first time is great, but they tend to have a short shelf-life. I can still listen to older music, over and over again. I don’t know that I’ll ever tire of Beethoven’s _Moonlight Sonata, or Paul Kelly’s From St. Kilda To Kings Cross, but shorter comedic works are a bit less lasting. (Pardon the pun). It will be interesting to see where Tripod are in ten years, and if anyone listens to their music. Regards, f you get the chance, run, don’t walk to see them. As comedic bands go, they are without peer. Except for maybe Kevin Bloody Wilson.

Note to self: Classical Music is good public transport music. Why? Because you are less likely to sing along. People look strangely at you when you sing on the train, for some reason.

I have a little joke I make when people ask me how work is. It goes a little like this:

Other Person: How is work going?

Me: Okay, I suppose. I mean, it’s not like work is supposed to be fun or anything. That’s why it’s called ‘Work’, and not ‘Fun’. Can you imagine what the world would be like? “Well, I’m off to Fun now, I want to pop in there and have a little fun for a couple of hours”.

[Other Person walks away…]

Me: Hey, where are you going. Come back…

Not having to do a heap of marking and preparation.

Not having to attend staff meetings.

Not having to attend Parent-Teacher interviews.

Not having an income during holidays.

Okay, at the moment that last one is a bit of a kicker. My aim is to have some other sources of income, something that allows me to work ‘from home’, whether it’s building renovation and maintenance, coding or otherwise. I sometimes feel that my generation is the first one to decide that we don’t have to spend our whole lives working, to support our lifestyles. Our whole lives should be our lifestyles. Life is short. Enjoy every day.

Daisy Duke Dances For You. Best. Thing. Ever. (Thanks to Ash Green for the link!)