Hmm. Original name for a monthly magazine. Even cooler if it comes out with a frequency other than it’s name. I probably would have never come across it, but a copy of the first issue, May 2005 was sitting on the counter I went to in Hudson’s this afternoon. (And I would not have kept it, had they put a decent amount of froth into my flat white. Flat White. Flat. Not one-third froth! Get with it guys! I know I should tell them, but I prefer venting later.) So I started reading it. And, I must say, I quite enjoyed some of the articles. I haven’t finished it yet, but I liked Don Watson’s piece on rural values, and the article on the smoke ceremony that followed the death of the aboriginal chap on Palm Island. And (although I’m only part way through it) John Birmingham’s take on Ipswich and John Howard. But, I’m not convinced that Suicided is a word, Chloe Hooper. According to Google: Did you mean: Suicide And to Dictionary.com: No entry found for Suicided.

How to get that perfect shave - Today, Weekend Edition - MSNBC.com: I hate shaving, but since we have to, we might as well do it well.  This article really opened my eyes - I’m actually looking forward to shaving next week…

I’ve never understood the fascination Australians have with horse racing in general, and the Melbourne Cup specifically. Mind you, I’m not a real big fan of motor racing for that matter either. Anyway, back to “the sport of kings.” My sister is a Vet, and races Pacers (which, I just learned a week or so ago, are different to Trotters), and obviously she and her husband are kind-of into horse racing. Whenever I’ve been out drinking and horse racing has been happening, (like at Dan’s bucks night, and Sam’s bucks night, and so on) I’ll ring Tish and ask her for a tip. Either she doesn’t have good tips for normal horse racing, or just likes feeding me duds, as none of them have ever come in. Back when I was teaching swimming lessons we used to have lunch at the pub every day, and have a bet or two on the horsies, but I was never really that into it. When we go to the easter races at Oakbank I’ll follow Marion’s tips, but that’s only because they tend to win. I think that’s what it comes down to. I don’t mind doing it when I win, but I think I’m realistic enough to understand that I’m not going to win in the long run, and don’t even consider putting a large bet on, even if there’s a chance to make a lot of money. I just don’t have enough of a gambler’s streak for that to be an appealing option. I’m not really into gambling at all, come to think of it. Pokies seem like a waste of time - I’d rather put my money into a video game machine where you get to shoot stuff, rather then just push buttons and rely on dumb luck. Maybe it helps that I’ve never really won any money in gambling. Perhaps if I’d won a bit on my first time, I might have become a gambler. Maybe not. Even when we went to the pub in Sydney a year or so ago, Andy and Dan played the pokies - I played ‘Big Deer Hunter’. One of the other guys won some serious money. I wasn’t jealous at all - I knew I probably wouldn’t have. Moving onto a related topic, I was watching Episode 5 of Lost Season 2 last night - the episode where Hurley remembers winning the lotto, and how his friend basically became jealous of him, and just walked away. I don’t know that I’d be jealous of someone else winning millions of dollars in the lotto. I guess because I’d never enter it myself, I like to think I’d feel happy for them. Back onto horse (and motor) racing. I fail to identify these as sports. Sport is about major physical activity. Fitness and the like. Which these, IMHO aren’t. Reminds me: I’m making my Men’s Open Touch comeback tonight. I wish I was fit.

Boing Boing: Torn posters of Sydney I like the graffiti that Jason talks about sometimes, in response to the “Bill Posters will be Prosecuted” notices that appeared on many Adelaide buildings in the 80s and 90s:

I bought a proper razor on the weekend. One of the ‘old school’ (I hate this term now, it’s been corrupted by the youth. Any type of Mobile Phone, no matter how old, is ‘old skool’) razors, a double-edged safety razor. No shaving rash. Closer shaves. Might have something to do with the cream I bought too, but it’s nice. Even makes me look forward to shaving.

Well, consider this a plug for the Shaver Shop. Transform Yourself. 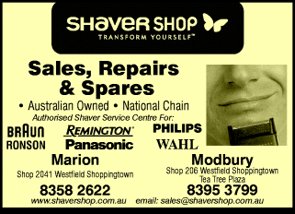 Seriously, the guy who served me was excellent. Didn’t try to sell me the most expensive razor or cream in the shop. I think he knows the value of patience, knows that if I am happy, I will come back, and buy stuff from him again.

Boing Boing: Interesting words from around the world My favourite: bakku-shan: a girl who appears pretty from behind but not the front. Japanese.

Jaq’s is 藤原 Fujiwara (wisteria fields) 千秋 Chiaki (very fine in autumn). Amusingly, if you use Matt and Jaqueline, you get the same first name. Deep. 松尾 Matsuo (tail of a pine tree).

From my referrer logs, I noticed someone had used Google Translate to translate some of my site into Brazilian, or something (pl-BR, IIRC).-Portugese (pt-BR) (Thanks Bob). I don’t speak, or read this language at all, but I have done a bit of German and French at school and University. So, I thought it might be fun to translate a few of the pages from my site into these languages on the fly, and see how accurate the translation engine is. It seems pretty good. Highlights for me were:

DHTML Lemmings That’s right: the great old favourite, Lemmings, implemented in DHTML. Luckily you can turn the music off. “Oh No!” Kaboom

Boing Boing: Gamers are better at multitasking And I would have gone back the other way. Jaq can’t talk to me and expect a response when I’m gaming.