I have Osteitis Pubis, an inflammation of the pelvic joint, due to poor muscle tone in my abdominal area, and overuse from Touch. I haven’t played a game of Touch since February, and have been going to the Physio, doing my exercises (occasionally). Last night, I decided to have a light run in my Social team (Arab Steed Pornstars). But I am unable to run ‘lightly’, and I wound up diving all over the place to score and make touches. So, I am a fair bit of discomfort this morning. I guess I was a little premature in my return to sport…

… But when they arrived in Sydney yesterday morning they were told their luggage, in which the cricket tickets were packed, was still in England and would take three days to get here.

So let me get this straight. They didn’t carry their tickets in their hand luggage? That’s just plain stupid! It’s not like tickets are particularly bulky even! Whenever I take teams touring, they always pack all of the stuff they need for playing in their hand luggage, just in case the airline loses their checked stuff. And it’s a bit harder fitting playing gear and boots into hand luggage than some tickets in a small folder. They deserve to miss the match.

Boing Boing: Bouncing breast simulator from sports-bra company Hope the title gotcha! Seriously, some site has a simulator of bouncing boobies during exercise - with and without various types of bras. You can dial in your breast size (I’ve forgotten mine!) and see it in action.

It’s no secret I think Touch Football is the coolest sport in the world. However, a couple of sports I caught on SBS’s broadcast of the Asian Games came pretty close. The first one was Kabaddi. It’s basically chasey, which makes it cool enough. But it’s got some other cool rules, and is truly stunning to watch. Grown men ‘tagging’ one another, and then trying to escape without being pinned by them. The other was Sepaktakraw. Think of volleyball, but instead of using a large air filled ball, use a small cane one. And instead of hitting the ball with your hands, use your feet. There’s still a high net, and this one is also amazing to watch.

My sister and her husband own/train a few horses, and I put a bit on one of them the other day. This is what the ticket looks like: 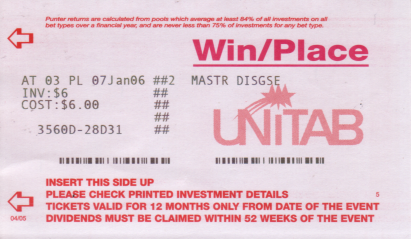 Now, the bit that gets my goat is that second line in the block of four down the bottom.

Investment. It’s fucking gambling! • Oh, and Master of Disguise didn’t place. So my investment was worth nothing.

One of the Podcasts I subscribe to is Quirks and Quarks, from CBC, the Canadian Public Broadcaster. The latest episode has the main story about exercise, and ‘busts some myths’ related to exercise. There are a few different myths that are dealt with, but the one that affects me most is:

That is not to say that warming up is a bad thing - some light exercise is actually beneficial, but stretching is not. For one thing, stretching causes miniscule tears in the muscles. This allows the muscles to move further, but actually impairs performance, as the muscles are not as strong as they were prior to stretching. This effect can be up to a 10% loss in strength. These micro-tears, which are the way the muscle can be improved in the long term, also increase the chance of further damage to the muscles. Think about how a small chip in a car windscreen can expand with just wind force, and you’ll get the idea. Forces can be focussed onto the weak point, causing catastrophic failure. This is not to say that stretching is _all _bad. In fact, a stretching session is great, even if you aren’t a sportsperson, as it increases the overall range of movement and flexibility. I may have to consider this as I run my training sessions this year for State. The other issue that was of some relevance, to me at least, was:

I was planning on running a beep test in the first weeks of my training schedule for the 15s this year, and then another in the final weeks, and see how much the girls improved. I think I’ll still do this, but it will be harder to berate them for not working hard enough if they don’t improve. Having said that, I suspect that the girls we select will be those that are genetically predisposed to improving with training, rather than the other way around.

The AFL Grand Final was on this weekend, and no Victorian teams were in it (or even got close). This is particularly galling for the Vics, as the AFL used to be the VFL, and until very recently, the Victorian teams were still the powerhouses. Oh well. It’s all fun and games, isn’t it…