I have a Windows box on my desk at work now. ugh.

To make it bearable to use Visual Studio, with her three areas and a scroll mouse:

This makes it operate like OS X, where the controller that the mouse is over scrolls, rather than the active one.

If you instantly go “Yes, I know what you mean”, then you’ll need this.

I’m very sick of the INFO cmdproc.c:98:show_debug_cmd() rubbish that the latest Adium release is spewing into my Console Log twice a minute.

I’m finding I’d rather leave IM off, than see it traced across my desktop.

(I use MkConsole to keep an eye on things).

I’ve had cause to transfer a whole stack of data from an old sqlite database to a PostgreSQL database, and since on the new database I am using SQL Alchemy, I used SA to do the transfer.

Because of some of the relations, I have had to keep IDs constant across some of the columns. This is fine, but because they have Sequence objects associated with them, these are not kept up to date with the ‘custom’ created IDs. Thus, when attempting to create a new row in the table, it often fails, since it is trying to add a primary key that already exists.

After a little bit of research, I discovered it is possible to force the sequence object to increment, using the command:

Using a little bit of magic, we can find out the largest index currently in use:

And a simple while loop will keep incrementing until we have reached the correct id.

Less than 12 months ago, my (effective) father-in-law bought a new Acer laptop. It came with Vista installed, and was “better than a MacBook Pro, and heaps cheaper.”

I’ve spent countless hours since then trying to get it to work smoothly. For instance, if you create a bluetooth connection to his HP printer, it prints. Once or twice. Then you need to delete the printer and re-create it for it to work. My MacBook Pro connected once, and all was good.

Another issue has been with network connectivity. He’s using a GSM USB dongle to get wireless internet, and it’s rather flaky. I plugged the same dongle into my laptop, and it worked. I can’t recall if I needed to install any software, but, and here’s the important part, if I did install a driver, it used the system’s networking stack, rather than installing another one. This is something that the PC world just doesn’t seem to get. I had to “fix” a similar problem with my sister’s machine. Using the basic Windows WiFi driver gave a much better result than the one that came with the laptop.

Finally, he decided that it was worth the effort getting an iMac. He’d then set up most of the stuff before I arrived, including the wireless internet, and all I had to do with install VMWare (and WinXP) so he can run his share-tracking program, and anything else he may have to run under Windows. Oh, and Office. I’ve got him trying out iWork, but we’ll see how that goes.

I also had to help him transfer across all of his iTunes music and photos. I’d bought my laptop with me, and had set up an ad-hoc wireless network, which I had confirmed was working. I had shared his Public directory on the iMac, and was able to connect to it from the PC, but was having trouble getting the PC share to actually appear on the Macs. Eventually I did, and copied the files across. As it turned out, I needed to change the ad-hoc network name several times as I tweaked the settings, as Windows seems brain-dead when dealing with changed network properties and the same network name. I’d hit this issue in the past when trying to connect with an old laptop (no WPA) to an ad-hoc network created by one of my machines.

I then imported all of his photos into iPhoto. Which, I discovered, is now not the clunky old program it used to be. It feels more like iTunes, but is even more snappy. It has the nice little feature of scrubbing over all of the contained images like the new iTunes view.

I think I’m going to have another try with iPhoto. I got right into Lightroom when I had a DSLR, but since I don’t take too many photos anymore, so something less high-end will do me fine.

And, I can then use the fairly cool screensaver that uses the iPhoto library to create mosaics. I’d forgotten how cool that was. I think that feature alone caused his other daughter to proclaim she too would get a Mac.

I’ve reinstalled Leopard - hopefully that will fix the problem I was discussing yesterday. I really don’t know if it’s a software or hardware issue, though.

Getting rid of the cruft I had installed seems to make my machine boot up a whole lot faster, but.

For some reason, iSync appears in the menu bar after a reboot sometimes, even though I have unchecked “Show status in menu bar”.

When I reload iSync, the setting has reverted back to being checked. This doesn’t seem to happen all of the time, just sometimes.

After my last post, I has kinda bummed when the same thing happened again. Luckily, the same process fixed it, but I really don’t know why it occurred to begin with. I think the same fault was fixed by fsck, so that might have something to do with it.

Anyway, I took some snaps this time. 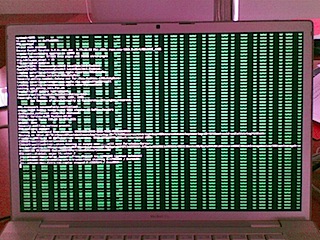 I wasn’t able to take a shot of the initial boot screen (ironically, it caused my phone to crash. Twice). 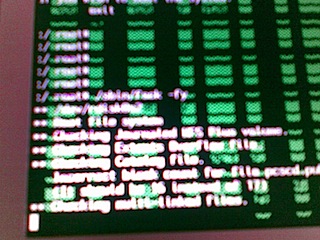 This second one shows how the text is now overwriting the green corruption. Sorry about the blurriness, but if you look carefully you may notice that the file with the incorrect block count is pcscd.pub, or something. This appears to be the file /var/run/pcscd.run, but I don’t really know what this does.

Something almost bad happened to my MacBook Pro today.

I’d been using the machine all day, on and off, on both battery and power. I showed some code to a lecturer, and then closed my laptop and moved to another lecture theatre. It was there that, after about half an hour, when I was bored, I decided to open my laptop and check my email.

Screen was black. I’ve had some issues with the graphics card not always working properly (it’s related to a garbage display when scrolling issue), so I thought that might have reappeared. I don’t remember why, but I pressed the power button. I wasn’t expecting anything (if the display was disabled, then at most I should get a beep).

The screen came on (or, as I later figured out, the whole machine came on), but the display was overlaid with a pink pixelated pattern. Initially I thought something was odd, and I force-restarted it, since it didn’t appear to be responding.

The next time it booted up, it had the same pattern. Leaving it a little longer, I noticed that it displayed the grey screen with the darker apple logo, and the spinner underneath. After about a minute, it had a kernel panic.

I even tried swapping out the RAM, but nothing looked to fix it.

Finally, I tried booting up in safe mode. ⌘S will do this, and when this kicked in, the screen turned black, as expected. The areas that were pink now turned green. I got to a command prompt, but when I typed “exit” to continue booting, it seemed to hang on the WindowServer loading. (I must confess I restarted quite early, since I wasn’t having any keyboard response, even though it may not respond at this point).

Rebooting again in Safe mode, I did an fsck -fy. About halfway through this I noticed that the text that was appearing was overwriting the green graphics glitches. When it completed (and it did find one error), I restarted, and the machine appears to be back to normal.

I wouldn’t have lost much data (I do have backups), but I would have lost work time. Or blogging time, or whatever!

Postscript: Interestingly, checking the panic.log shows me that it was WindowServer that was causing the panic. I don’t know why, but I hope it ceases to occur!

Yes, I think I have the Curse of Competence.