I’ve listened to ABC Classic FM almost exclusively for a year or two now, and it struck me the other day how much classical music the average young person is exposed to. Surprisingly much, but most of it is film scores. I challenge a week to go by without hearing some ‘classcal’ music. If we count The Simpsons theme, I’d change that challenge to a day!

Ain’t technology wonderful. Listening to iTunes tonight, I noticed that the song Darling Nikki has a little bit at the end that is backwards. Grabbing this and reversing it in Sound Studio (but it wouldn’t play in SS, had to re-save it and load it in QuickTime Player), it gives the following:

Reminded me of the segment that John Safran had on Music Jamboree a few years back. Way back in 2002, according to the website.

The following function/script will dump the data from a RealPlayer stream to disk as a WAV file. Put it into your ~/.profile, or make a shell script out of it.

It creates a file with the same basename (the filename minus the extension), with an extension of .wav; there is no checking to see if the file exists already, and old file will be overwritten. The argument to realdump can be either the URLs of the streams, or the name of a file with the URLs of the streams in it. It should handle files with multiple entries, so you can concatenate a series of .ram files, and it should download each of them in turn. Ensure they have different filenames, not just different directories!

Back in the old days (I’m talking 1993), I found an OctaMED module on Aminet, that I really liked, called Rainlight. Since then, I’ve often thought about this track, and today downloaded it again. Finding something that would play, and convert it well was a bit of a struggle. I tried SoundApp, but that would have clicking errors, so I had to look elsewhere. (I later found out these errors were due to it trying to upsample to 22kHz, 11 works okay.) I also tried CocoModX, which would only play the track too fast. I could change the tempo, but this song has tempo marks throughout it, and it kept speeding up again). Finally, I used Sound Trecker, which, like SoundApp, requires classic, but it worked (I was able to change the sample rate), and I was able to export it to AIFF, and then import this into iTunes. So, and important part of my computing/music heritage is now safe in my iTunes library. Yay Rainlight.

Hold that last post! I just saw these designs for cable management, over on Sumajin.

Plan for tomorrow. 1. Create something like this out of acrylic. 2. Enjoy not having dangly cords everwhere.

I’m not totally happy with the standard iPod headphones. They don’t prevent much noise from outside, and they tend to make my ears sore after a few hours of listening. Quite by accident, I came across a review on Amazon.com for some Sony ‘in-ear’ headphones, that have silicon buds that actually seal quite well in the ear, increasing both comfort and noise reduction. I went into Sony Central in the city, and they have them, but at $99. I’m not quite sure I’m ready to buy $100 headphones.

I really like my headphones I use for my iPod. I blogged about how good they were back in July, but I’ve decided there really is something I don’t like about them. Basically, the cable is too long. If I just plug them in, and put the iPod into my pocket, the cable hangs down to my knees. The weight of the cable at this length means that they are almost pulled out of my ears, and don’t feel comfortable. If I wrap the cable around the iPod, it’s much better, but I have to ensure I get exactly the right number of loops, as either the cable is then too short (and is pulled out of my ears if I turn my head), or is still too long. And having the cable wrapped around the iPod means it’s harder to get into my pocket, and harder to control when it’s in there. (I’ve discovered you can change the volume through fabric, as well as skip tracks). I’m considering buying some of the Apple branded in-ear phones I saw in the AppleCentre the other day. I might just try replacing the plug with another one, and shortening the cable, first. All I have to do is find a nice looking 3.5mm plug, now…

This was not all of the tracks, but a pretty good selection, nonetheless. You can hear my signature here.

The BBC has a heap of stuff available on their website as part of the Beethoven Experience, but I found my copy of RealPlayer had expired. I’d rather dump the data to disk and listen to it later (on my iPod, probably). But, the only ways I could find to do this didn’t work with the software I had. Specifically:

fails, as does using VLC. I’m downloading newer versions of both of these, but I’m not that hopeful. Mplayer seems to not want to access network protocols, VLC cannot decode. Nor can it just dump to disk, without interpreting the data.

I mused a couple of days ago about better headphones for my daily iPodding-commute. I looked at the Sony ones, and they varied in price between $75 and $119 (AU$). I wasn’t quite prepared to pay that much, so I found another, cheaper pair. Enter the JVC HA-FX55W in-ear buds: @ AU$37. Still more than I have ever paid for a set of headphones (I think $2 was the most, and they were crap). 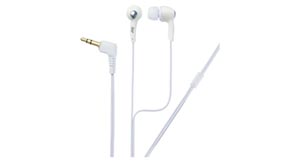 They are not noise-cancelling buds, or at least not active ones: they a more like the soft earplugs I use most days at work, and I quite like the feeling of them in my ear. The best feature is that they really do cut down on the amount of outside noise that gets in, so I can keep the iPod on a lower (constant) level, no matter where I am: be it on the train or next to a busy road. I have found one possible drawback, when in medium-high wind, there is a whistling noise I can hear. Would not be good on a bike, but I’ll see if I can adjust them using one of the supplied covers.