Jaq bought me a book while she was in New York: “Wonderful Town: New York stories from The New Yorker.” It reminds me more than a little of stories by O Henry. Just the feeling of the stories - they feel like the always awake city, even though they are generations apart. I’ve never read the New Yorker, although I may start in the near future, so all of the tales are new work to me. (Sidetrack: I used to think the road signs saying “NEW WORK” said “NEW YORK” when I was about 4. My sister had taught me to read, and I guess I wasn’t perfect at it yet!)

The foreword was illustrative - I almost enjoy reading what authors & editors say after they’ve written the books more than I like the books themselves. David Remnick, the editor of this volume & the magazine, obviously loves the city as much as the authors who follow him. New York (so good they named it twice - just like Wagga Wagga!) apparently is an amazing place. For me, the biggest tragedy of the Al-Quieda attacks (which occurred months after the publication of this book) was that it may have changed the city that never sleeps. Maybe, and I suspect this, NYC will not only survive but thrive. Anyway, I’ll post excerpts, reviews and the like as I read through.

I have downloaded Books, but only entered about one section of my library into the program. Entering ISBN codes is just too much fun. Now, watch out for Delicious Library. iSight barcode scanning. iPod Sync support (hopefully with PalmOS as well as iPod - I’ll put in a feature request!). Finally, a chance to totally catalog all of my books. Instead of doing real work! GRIN.

I’m not the only person publishing their novel on a blog as they post: Le Spirale Fantastique is a novel that an Indian fellow is writing, but he’s doing something a little cool - if you use a quote from his novel, and link it back to his novel, he will link that quote to your website. See if you can find my link - I’ve actually used the quote as part of my novel.

I didn’t originally plan to write a review for this book, but after devouring it in one sitting (I should have gone to sleep…) it did have some points I thought were worth discussing. I do not have a wireless network (I’m still not entirely sure why WiFi - what’s Fidelity got to do with a digital data system?) but I do know a fair bit about TCP/IP networking, and ethernet. My home network is all 100baseT, and all of the cabling & setup was done by me. Chapter 1 was pretty informative - I for one didn’t really know about the incompatibilities between 802.11a & 802.11b, for instance. Chapter 2 was more ‘general networking’ - I for one could have skipped it. I guess if you didn’t know the difference between a router and a hub, or between DHCP & FTP then it would be more useful to you. Chapters 3-6 would realistically be about enough to enable someone to begin hacking a WLAN. Chapter 3 was a bit light on real info - it is more an overview of crackz/warez culture, but the others were chock-full of tips on how to break into a WiFi network. I for one never really thought that connecting to an access point could in itself be somewhat fraught with danger. The remainder of the book deals with virii, WLAN security & troubleshooting. Obviously the point of the book is how to protect a network, and I think there is a lot of stuff that everyone setting up a WLAN should know. There doesn’t seem to be a lot of mis-information, possibly with the exception of changing MAC addresses - I thought this was relatively easy to do! I’m sure even an Xbox can change it’s MAC. It strikes me that some sort of SSL-like system, with keys instead of passwords, would be better. I for one dislike passwords, even though I have a pretty good memory for obscure numbers & combinations of letters. This too could prevent spoofing, by encrypting all data. An attacker would be unable to correctly generate valid packets. I for one would like to see better adoption of encryption & verification across the wired world. In the spirit of this, here is my public PGP key! —–BEGIN PGP PUBLIC KEY BLOCK—– Version: GnuPG v1.2.4 (Darwin) mQGiBEFs64ERBACBdiB0d9kE3xhRG1PqOIpx1BQeRRv8LxNq30Gme6Q2sr4pp7SV ZnAJCXnbM9yphXojycWhEwHHpBxuMrXP5YkWNxK0Vu8/rKZ5eHThCf5My4yRdo41 ATE+oDNVdeAi/AqIR0DGgdhUbJ+wa7az79xMexWInqHXy7aCVKUTTqKLYwCgoTct RmPw67RR4GX33bjSchIVcKUD/jUFvMg52zX70pWq/t1HvrTFIwWXQ0MrTn7GLzyC oyM8miZjpBgWma+Q1Fxk6RAnjfcB+1G7M8FVYmpyjLiEApuAQZPnKm+ljMWu+49s 1BQ6RcHnFH4xke0bR7Uow+HNgiujcQyR21aPBQfBBX4pIz//6zqO9swx9qm25lcr qsKiA/9O+E3HluLRw9IXFUyL4Tt1CJcokxmlE+enN1ItYpxcLTbM/0jvID4A04+m gUr/gG64hbOagAwHK5zgX+S1La4fDMvE5u/+9JcjPB7Wu9bSMNoFnHcYNg36E3m4 5N5onAm9Ug2VY6inGujl9Bb9wX9wF2D+PfwLdbySqGnwXnfTrLQmTWF0dGhldyBT Y2hpbmNrZWwgPG1hdHRAc2NoaW5ja2VsLm5ldD6IYQQTEQIAIQIbAwYLCQgHAwID FQIDAxYCAQIeAQIXgAUCQWz+vgIZAQAKCRBA0AanULPEZ3ZrAKCep0wuxnFe4Y3s Ss4WEAgGvE5/MQCgk/iraP0KLn8UnRKIhqB3WXvEG2aIXgQTEQIAHgUCQWzrgQIb AwYLCQgHAwIDFQIDAxYCAQIeAQIXgAAKCRBA0AanULPEZwjRAKCeGWU+ndSPi8p8 1tPUAUFjhvAolwCdHSikf9vlSpPOqksDgZGe5V0fkT60LE1hdHRoZXcgU2NoaW5j a2VsIDxtYXR0LnNjaGluY2tlbEBnbWFpbC5jb20+iF4EExECAB4FAkFs/tsCGwMG CwkIBwMCAxUCAwMWAgECHgECF4AACgkQQNAGp1CzxGeXDQCgjyXXRbrB9iqB5IAR gaR2As1eYAYAoI/4d2XgY65w60b76txicn/o2oA7tDJNYXR0aGV3IFNjaGluY2tl bCA8bWF0dC5zY2hpbmNrZWxAb3B0dXNuZXQuY29tLmF1PoheBBMRAgAeBQJBbP7x AhsDBgsJCAcDAgMVAgMDFgIBAh4BAheAAAoJEEDQBqdQs8Rn0ZMAn18z/JhbkmTu GD86rY73ynchTUrbAJsEyqnFTe+n7iJg2G3kJQTSmud3RbkBDQRBbOuEEAQAngC+ 5hO8JVx1OogzSR7jeRZ/3vXbvTlUwxpE0q8/oiEtKfCrPbkSvQRGIRRqZVJx6cQ4 318dt4SJmMRRpDK8wuCJzhstW2B+AB/nseZZbozGZ86PT33JB1T3PJ9oN5Lw8eT6 0j5vQX/yExi63sh+pnFfietKSsztbTXHKjFmF1MAAwUD/2ClCxy6IE/G4EgXx2IJ Hah3FFH7kMiR3heFKrx0okS1shJC4WZMIbPatwzTDXH0E9XYOLZG5Jb2cqEZwlL1 o+9aQU1cbtGqTQFAZSbeev0WshZkFePJfC9xIJc96vKAnQWJjRnJH5ZRlpsuCp7A TQnBUQf76uxA3iWGZ5+uTaYliEkEGBECAAkFAkFs64QCGwwACgkQQNAGp1CzxGfb mQCdHEaG/eu1D3ohpAzwKDPUuHe9l0EAn3aG5WGTw311tsrilcoVndsMSJdG =CA7T —–END PGP PUBLIC KEY BLOCK—–In closing - this book is almost a must-read for anyone using or developing a wireless network.

I just started reading “Mind Wide Open: Your Brain and the Neuroscience of Everyday Life” (Steven Johnson) today, and then find a link to his blog tonight. Synchronicity! After reading through most of the stuff there, and subscribing to his RSS feed so I don’t miss anything, I finally found a link to a review he wrote of the Jim Carrey movie Eternal Sunshine of the Spotless Mind. I’ve just read, in creating the links that it was a Kaufman film (ie. Being John Malkovitch / Adaptation). I may have to rent it and have a watch. So, here’s SBJ’s article: The Science of Eternal Sunshine - You can’t erase your boyfriend from your brain, but the movie gets the rest of it right. By Steven Johnson: http://slate.msn.com/id/2097502/ iTunes: Your Disco Needs You from the album “Light Years” by Kylie Minogue

Top 20 geek novels – the results! from Guardian Unlimited: Technology Ones in green are those I’ve read:

I bought a copy of this fantastic textbook on Friday.

I won’t write a review, suffice to say it is the book to use to learn how to program on the Mac.

I’ve heard of BookCrossing.com - lost of people have. The idea is that you find a book somewhere, read it, and leave it somewhere else. Until tonight, however, I’d never actually come across any BookCrossing books. I suppose I could have just printed out the stuff for one of my own books, but I’ve never been one to give books away. I like keeping them. So, the book I found tonight is Tall Poppies: Successful Australian women talk to Susan Mitchell. Not exactly standard fare for what I normally read, but I’ll give it a whirl. It was first registered by crossword, in Adelaide, SA. I might have to leave it somewhere a little more exotic. Perhaps in Hamilton.

I’m most of the way through the abridged version of the Da Vinci Code, as read by Jeff Harding. I think I’ve come across a Big Plot Flawâ„¢, but be aware that this post contains a plot spoiler.

Now, gazing up at the spires of Rosslyn… • Dan Brown • The Da Vinci Code

Apparently, Teabing is The Teacher. He seems to have been the driving force behind the murder of the Grand Master, and the Senechals. However, there are two issues here: how did he get out of the back of the car, and how come Remy did not recognise him at their meetings? Or maybe I’m missing something here? Time to Google thisâ€¦ • Yup. Wikipedia shows that Teabing is the Teacher. But no mention of how he got out of the back of the car, nor how Remy did not recognise him. In fact, it says they are in cahoots. Yet Remy was approached by the Teacher to spy on Teabing. I don’t get thisâ€¦perhaps this is dealt with better in the full text.

Everybody Hurts • R.E.M. • Automatic For The People

I love to browse bookshops. Back in the day, when I had money, I always bought at least one book. Now, I spend more time at libraries and second-hand bookshops. On Saturday, as we tried to avoid the heat, we went to the movies at Marion Shopping Centre. We saw Mrs. Henderson Presentsâ€¦, but more on that later. We ate at Shenannigans, but more on that later. We had a coffee at Coffee Club, and I won’t elaborate on that. 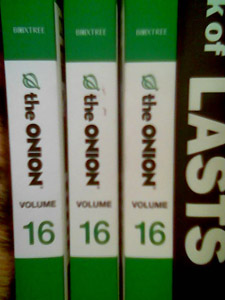 However, after all of this, we still had a little time free, so we went into Dymocks. I tend to looks briefly at the specials, and then head over to the Popular Science and Non-Fiction sections. After browsing for a little while, I came across a collection of the Onion. I read a bit of it, and took it over to show Jaq, as there was something funny on the front cover. I think it was:

US Military clears A-Team of all charges

I used to love that show. Anyway, back onto the story. After flicking through it for a few minutes, I returned to the shelf I grabbed it from. And imagine my surprise in what section that was: 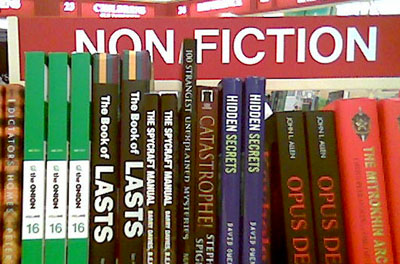 Now seriously, Dymocks. It doesn’t take a very long read of the Onion to realise that it’s not Non-Fiction.